What is the Project Tango lens distortion model?

The Project Tango C API documentation says that the TANGO_CALIBRATION_POLYNOMIAL_3_PARAMETERS lens distortion is modeled as:

I've had a lot of trouble getting things to register properly, and I suspect that the mapping may actually go in the opposite direction, i.e. the distorted coordinates are a power series of the undistorted coordinates. If the camera calibration was produced using OpenCV, then the cause of the problem may be that the OpenCV documentation contradicts itself. The easiest description to find and understand is the OpenCV camera calibration tutorial, which does agree with the Project Tango docs:

But on the other hand, the OpenCV API documentation specifies that the mapping goes the other way:

My experiments with OpenCV show that its API documentation appears correct and the tutorial is wrong. A positive k1 (with all other distortion parameters set to zero) means pincushion distortion, and a negative k1 means barrel distortion. This matches what Wikipedia says about the Brown-Conrady model and will be opposite from the Tsai model. Note that distortion can be modeled either way depending on what makes the math more convenient. I opened a bug against OpenCV for this mismatch.

So my question: Is the Project Tango lens distortion model the same as the one implemented in OpenCV (documentation notwithstanding)?

Here's an image I captured from the color camera (slight pincushioning is visible): 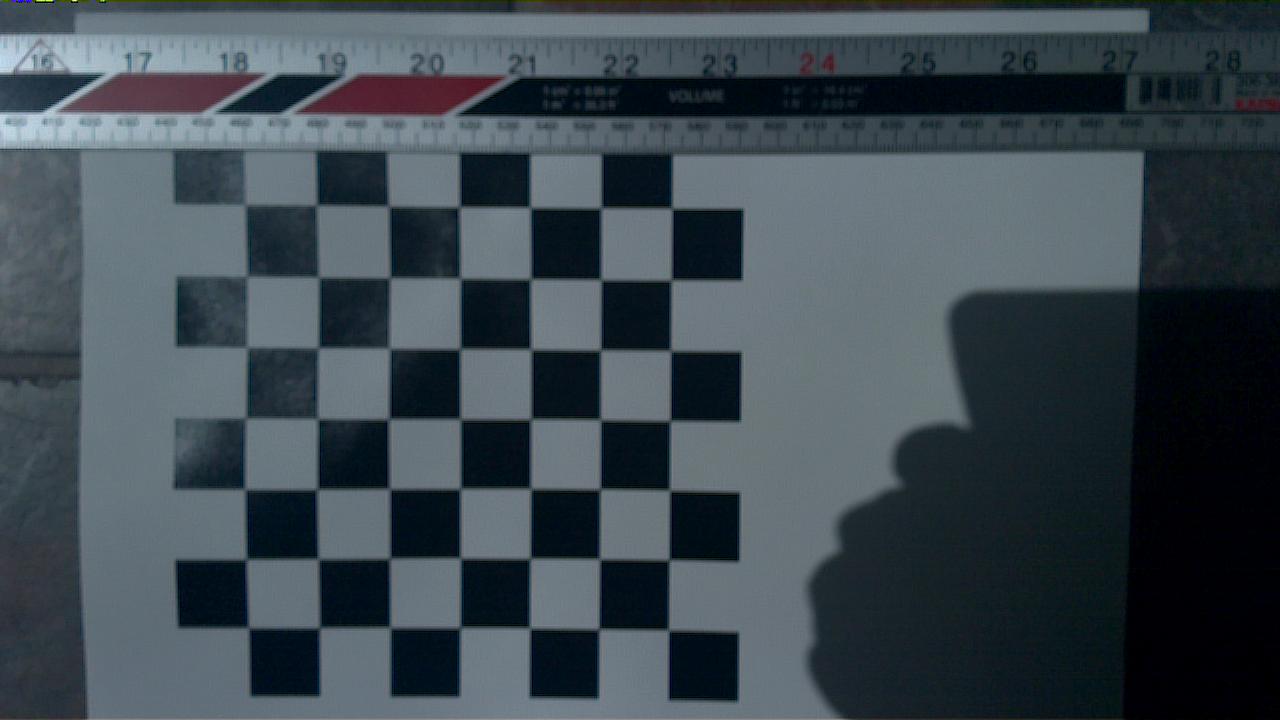 And here's the camera calibration reported by the Tango service:

Here's how to undistort with OpenCV in python:

And that produces this, which is maybe a bit overcorrected at the top edge but much better than my attempts with the reverse model: 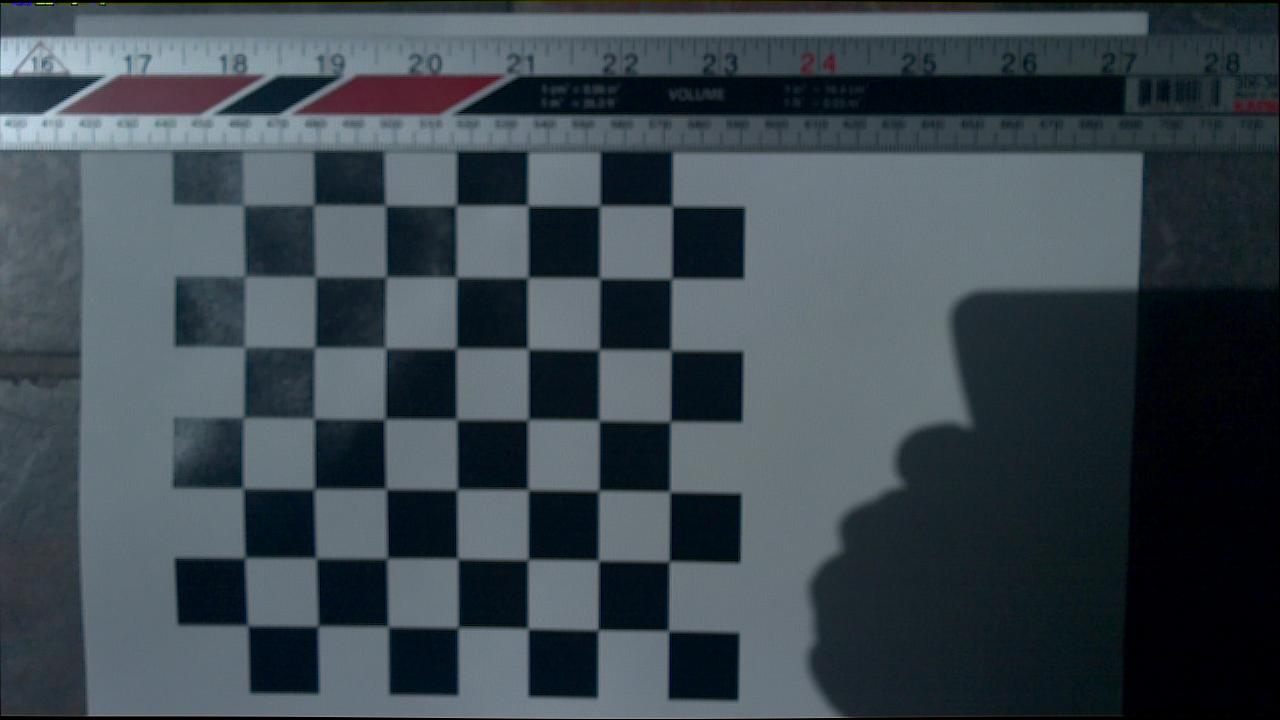 So, to project a point onto an image, you would have to:

Looking at the implementation of cvProjectPoints2 in OpenCV (see [opencv]/modules/calib3d/src/calibration.cpp), the "Poly3" distortion in OpenCV is being applied the same direction as in Tango. And, since 'distorted coordinates' and 'corrected coordinates' are the same thing, all 3 versions (Tango Docs, OpenCV Tutorials, OpenCV API) are consistent and correct.

Good luck, and hopefully this helps!

(Update: Taking a closer look at a the code, it looks like the corrected coordinates and distorted coordinates are not the same. I've crossed out the incorrect parts of my response, and the remaining parts of this answer are still correct.)

your code works for me. But you used cv::waitKey(0) which means that the program waits there until you press a keyboard key. So try pressing a key after drawing, or use cv::waitKey(30) instead. If this doesnt help you, please add some std::cout in your callback function to verify it is...

conversion between Mat and Mat1b/Mat3b

How to call OpenCV's MatchTemplate method from C#

So I tried different methods for this problem and the only way I could achieve a better performance than Matlab was using memcpy and directly copying the data myself. Mat out( index.cols, w2c.cols, w2c.type() ); for ( int i=0;i<index.cols;++i ){ int ind = index.at<int>(i)-1; const float *src = w2c.ptr<float> (ind);...

Camera calibration and conversion of coordinates(OpenCV)

The camera calibration process estimates the intrinsic camera parameters: the camera matrix, usually denoted K, and the lens distortion coefficients, D. (NB: the rotation translation matrices of the camera with respect to the pattern are also computed for each image used for the calibration, see "Extrinsic_Parameters", but they are generally...

Is there a way to prevent rounding in opencv matrix divison

OpenCV Save a Mat as Binary (1-bit depth) TIFF

Only 8-bit (or 16-bit unsigned) single-channel or 3-channel images can be saved by imwrite.

Extracting polygon given coordinates from an image using OpenCV

Use cv2.fillConvexPoly so that you can specify a 2D array of points and define a mask which fills in the shape that is defined by these points to be white in the mask. Some fair warning should be made where the points that are defined in your polygon are convex...

How to create thumbnails using opencv-python?

You can use cv2.resize . Documentation here: http://docs.opencv.org/modules/imgproc/doc/geometric_transformations.html#resize In your case, assuming the input image im is a numpy array: maxsize = (1024,1024) imRes = cv2.resize(im,maxsize,interpolation=cv2.CV_INTER_AREA) There are different types of interpolation available (INTER_CUBIC, INTER_NEAREST, INTER_AREA,...) but according to the documentation if you need to shrink the image, you should...

Few things: use sendall instead of send since you're not guaranteed everything will be sent in one go pickle is ok for data serialization but you have to make a protocol of you own for the messages you exchange between the client and the server, this way you can know...

I've only done a little bit of poking around so far, but what I've seen confirms my first suspicion... It looks as though each time you start the program, the random number generator is seeded to a fixed value: rng = RNG((uint64)-1); So each time you run the program you're...

That line of code is used to normalize depth values, which are coded in 11 bits in the C++ API. With that command, the 11-bit representation is converted in an 8-bit one, which allows to display the depth map as a grayscale image. Anyway, you don't need to use that...

best way to create a mat from a CIImage?

Solving this problem requires the knowledge of three simple tricks: 1. Interpolation: The process of gradually changing from one value to another is called interpolation. There are multiple ways of interpolating color values: the simplest one is to interpolate each component linearly, i.e. in the form of: interpolated = start...

This is not the right way to test for type conversion. OpenCV's data variable in cv::Mat is always of type uchar. It is basically a pointer to memory, but it doesn't mean that the data is uchar. To get the type of the image data use the type() function. Here...

I was finally able to create a library and use it in my Android project! The following links were helpful: http://tools.android.com/tech-docs/new-build-system/user-guide#TOC-Dependencies-Android-Libraries-and-Multi-project-setup https://docs.gradle.org/current/userguide/multi_project_builds.html http://www.petrikainulainen.net/programming/gradle/getting-started-with-gradle-creating-a-multi-project-build/ This whole process made me understand why most people just use Ecipse or Adnroid Studio. But if anyone else wants to try this, I will...

Remove all references to the library. Somewhere that project is pointing at the path you give above and you need to remove that. Then add the library into the executable project. Right click->add->existing item, change the type to all files, then browse to the file location. ...

As I suspected, it's the Coded! I used many of them, but then I found this question: Create Video from images using VideoCapture (OpenCV) then I used the coded MJPG in: outputVideo.open(name, CV_FOURCC('M', 'J', 'P', 'G'), 25, size, true); // create a new videoFile with 25fps and it worked! Here's...

how can i know if the image is in RGB or BGR format?

If your image is a BufferedImage then you can ask for his type with getType(), and test against the several constants (see: BufferedImage).

Camera Calibration with OpenCV: Using the distortion and rotation-translation matrix

How to install shared library and include files manually in linux?

As a work around, I created tbb.pc file to /usr/lib/pkgconfig/. Here is a sample of that file. https://github.com/openembedded/meta-oe/blob/master/meta-oe/recipes-support/tbb/tbb/tbb.pc Change prefix, libdir and include dir path according to your own tbb path and you're good to go. Hope it helps....

Dividing main function into other functions in opencv using c++

You should always do things that improve the readability and understandability of your code when first learning a language. (And, in many cases, well beyond that point.) Readability of code should be your number one priority at this point. That being said, functions do not really cost any more time...

Plenty of solutions are possible. A geometric approach would detect that the one moving blob is too big to be a single passenger car. Still, this may indicate a car with a caravan. That leads us to another question: if you have two blobs moving close together, how do you...

Must compile Opencv with Mingw in order to use in QT under Winodws?

You can compile it with Visual Studio as well. The opencv includepaths already have the opencv2 part of it. So the correct includepath would only be: C:\\opencv2.4.11\\opencv\\build\\include ...

How to create rotated rectangular or polygonal ROI/mask?

The main thing to take away is energy function used in this context is any function that is used for a maximization problem. Here, the energy function is the sum of gradients/derivatives/differences (i.e. "detected borders likelihood" in this case). Since you seem to have a non-algorithmic background, I suggest you...

adaptive thresholding ---ValueError: too many values to unpack

As per the documentation, the cv2.adaptiveThreshold() returns only 1 value that is the threshold image and in this case you are trying to receive 2 values from that method, that is why ValueError: too many values to unpack error is raised. After fixing the issue the code may look like:...

Try putting matches.reserve(size) with the actually size of the vector, before insert any element. This is necessary if you're using the OpenCV 2.2, but not with the 2.9...

Sending a Mat object over socket from Java to Java

problem solved from this link they had similar opencv :: Multiple unwanted window with Garbage name thanks for you all :) now am having one frame and perfect resolution...

OpenCV - Method 'knnMatch' could not be resolved

Error for cv::FileStorage in JNI

OpenCV is a framework written in C++. Apple's reference tell us that You cannot import C++ code directly into Swift. Instead, create an Objective-C or C wrapper for C++ code. so you cannot directly import and use OpenCV in a swift project, but this is actually not bad at all...

What's the fastest way to compare point elements with each other？I have used Nested for loop to do that, but it's very slow

This might be what you're looking for: http://matplotlib.org/users/image_tutorial.html Specificially look at the "Examining a specific data range" This will allow you to easily clip the image....

Downloaded 2.4.11 version couple weeks ago, so I guess that's the latest stable 2x version. You should be fine learning stuff from whole 2.4 version, most of them are essentially the same, this newspost tells that 2.4.3 version was more a bug and performance update. Offtopic, learning via Youtube videos...

Android edit images on the fly

Well... It seems you haven´t googled enough :P What is the best java image processing library/approach? There are lots of pure java implementations for image manipulation and effects....

how to use SIFT features for bag of words in opencv?

Training a bag of words system goes as follows: Compute the features for each image of the training set Cluster those features Label each cluster with the images that have features in that cluster At this point the training is done and you can start with the testing as follows:...