Why does my GlassFish server fails to launch from eclipse?

I am trying to test my web application in GlassFish 4 from eclipse. When I am starting GlassFish 4 with a file (startserv.bat), it works fine, but when I am trying to run it from Eclipse, it starts loading, but then the startup process gets stuck at 69%, on a message Launching Delegate...

After several minutes in that condition, it gives me an error message: 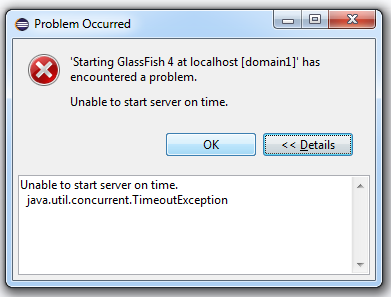 After a few re-tries, I got this message: 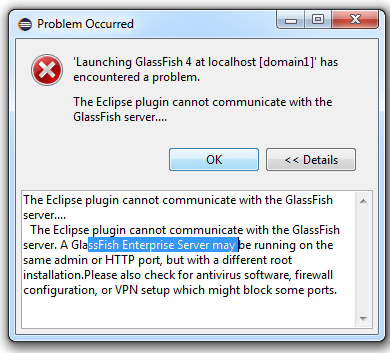 It worked fine for me before, but now for some reason, it just doesn't, I haven't done anything to it's settings or anything. How can I resolve this problem?

I didn't see any errors in the log, just some warnings about Hibernate stuff, which shouldn't crash the launch. It could be that it is taking too long to initialize with all of the eclipse overhead, but most likely it could be a locking issue, which could cause the timeout, since eclipse would be left infinitely waiting for a resource it could never obtain. Are you sure the server is only being accessed by eclipse, and is not already running or owned by another process?

In Vim, the behavior of the arrows when the cursor is at the BOL/EOL is governed by the 'whichwrap' option which — judging by the manual — is not supported by viPlugin. What you want would be achievable with custom mappings and a bit of vimscript logic in Vim itself...

You can run static code checks and their corresponding eclipse plug-ins to enforce comments being made in code. For e.g. in CheckStyle javadoc can be enforced http://checkstyle.sourceforge.net/config_javadoc.html Also checkstyle can be easily integrated with Jenkins. You can also use eclipse java compiler settings for javadoc check. Go to preferences->java->compiler->javadoc to...