I am using OpenFL to build an Android app to distribute on Google Play. I want to target only armv7 devices, and I believe OpenFL does armv7-only builds by default.

However when building the OpenFL build system creates and populates the libs/armeabi folder instead of a libs/armeabi-v7a folder. The problem with this is that this makes Google Play believe that the resulting apk supports armv5/armv6/armv7 when in reality it only supports armv7. This means my apps get some 1-star reviews from people with the older/incompatible devices.

On this Github issue, Joshua Granick (jgranick) explains why the build tools do this:

Oh and BTW, originally we tried only armeabi-v7, but it failed to run on certain devices. This is why there's the current behavior or using armeabi, and adding armeabi-v7 only if there is an armv5/6 version too

I would like to know what the issue he mentions is, and what devices/Android versions it would affect. Depending on what it is, it may be possible to still just do an armv7 build and manually blacklist the buggy devices.

A final option is to simply support the armv5/armv6 devices by doing a "fat" build, or by only building for armv5 which I assume is compatible everywhere. This is quite easy using the <architecture> tag in the project.xml file. It's a tradeoff I may take if there is no way to work around the problem Joshua mentioned.

Also using the Google Play developer dashboard I could also blacklist armv5/armv6 devices manually, but it would be very time consuming to do this for every app/apk.

So my question is: how can I make armv7-only Android builds using OpenFL and get Google Play to only allow compatible devices, without running into problems like the one I quoted above? If that isn't possible, then what is my best option?

For reference here are the relevant Google Play apk details I get when I build armv7-only: 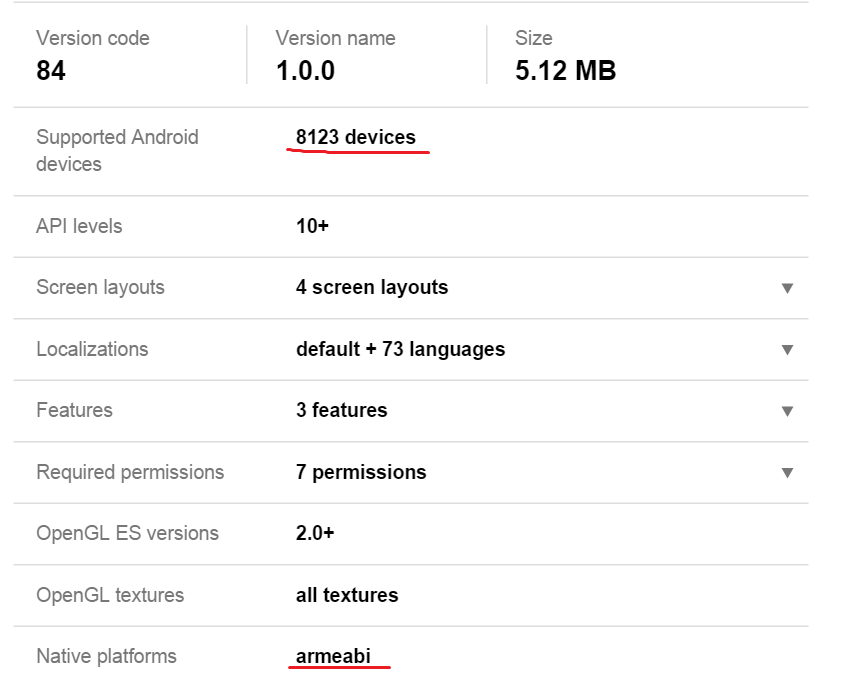 I got an answer on this GitHub issue. Some armv7 devices or the versions of Android on them cause apps to crash when there is no libs/armeabi folder in the apk. Joshua explained how this led to lime-tools (as of version 1.5.7) setup:

If there are both folders, it prefers the armeabi-v7a directory, but otherwise failed to work. So that's why the tools use only a single folder if you target only armv7, and use both folders if you include armv5 and armv7 both.

I'm not sure of a good solution for this, I think the key point of friction here is the Google Play submission process, which should allow us to account for that.

Given this, the solution that works for me was to simply do fat builds of my apps and also support armv5/armv6 devices.

Instead of putting the json in src/test/res/raw you might want to put it in src/test/resources/ and then you can use it ( with the latest build plugin and latest AS ) via getResource Be aware that there is a bug in older versions - you need to use AS from...

Note that you are using the deprecated ActivityInstrumentationTestCase2 and that TestCases like ActivityInstrumentationTestCase2 or ServiceTestCase are deprecated in favor of ActivityTestRule or ServiceTestRule. So try switchwing to using the rules, which is actually pretty straightforward. Also, be sure to use the correct annotations. Check my other answer here to get...

No, sorry. If you hand bytes over to a third-party app, that third-party app can do what it wants with those bytes. So only solution is to use some in-app pdf reader right? This will not completely stop people from copying your PDFs. However, it will limit attacks to those...

Crop does not work for gallery images

why is Android app publishing taking several days [on hold]

here is detail provided by the google and for more details http://www.appmakr.com/blog/how-long-app-approved/ https://somethingididnotknow.wordpress.com/2014/03/11/how-long-does-it-take-for-the-google-play-store-to-publish-my-app-in-beta/ Android application approval process in playstore ...

Option A A base Activity class that implements the logic for the menu items - in this case all 30 of your Activities should extend the base Activity. This approach has the serious limitation that it forces you to extend a class even though you may need to extend another...

Dagger 2 Custom Scope for each Fragment

Use the loginManager to add more permission. you can add it on click button or on create view or fragment LoginManager.getInstance().logInWithReadPermissions( fragmentOrActivity, Arrays.asList("user_friends")); You can also get AccessToken via following if needed after getting new permission AccessToken.getCurrentAccessToken() ...

Before the official support library came out I ported the FAB over. There is now a Xamarin.Forms sample in my GitHub repo that you can use: https://github.com/jamesmontemagno/FloatingActionButton-for-Xamarin.Android...

Why i get can not resolve method error in class android?

adapter.notifyDataSetChanged() not working when I update ArrayList

Bluetooth pairing - how to show the simple Cancel/Pair dialog?

Is there any way to use a pre-existing database from Xamarin without copying it from Assets?

You don't want to use it from assets, even if you could, because assets is a compressed read only file, part of your installation. You can't write updates into it, which kills 90% of database use. And its inefficient for reading as its zipped up. So you really do need...

Set value for Spinner with custom Adapter in Android

Add a ListView or RecyclerView to new NavigationView

how does android ImageView resize my image?

Contexts and callbacks from asynchronous tasks

getActivity() returning null is a perfectly valid scenario which you should expect as well. This happens because by creating anonymous Handler in your onCreateView you're referencing Fragment which was already detached from Activity (therefore getActivity() returns null). Same goes for your AsyncTask - if you're creating it as an anonymous...

Action view intent does not work

Intent action names are case sensitive. Use this: android.intent.action.VIEW ...

How to resolve Out of Memory Error on Bitmap in Android?

Broken pipe error when executing Android method more than once?

When you execute the command os.writeBytes("exit\n"); this ends your su session. The su process ends itself and the pipe your are using for writing commands to the su shell gets broken. Therefore if you want to execute another command you have to restart a new su session or do not...

android - service for interaction with wearable

I executed ur code. Just add numberView.setTextColor(Color.BLACK); and it will work! :)...

Notification whenever a new topic is created on mosquitto

A topics is only "created" when something is published to it the first time. There is no mechanism to detect this apart from subscribing to a wildcard topic that would match all topics of interest and triggering processing when the first message is received on a given topic. In the...

You can use an if on the result. If mysql_query() fails it returns false: $result = mysql_query(/*the query*/); if(!$result){ //Do stuff here, the query failed //json_encode() } else { //Query succeeded } Sidenote: mysql_* is deprecated, I highly recommend to switch to mysqli_* or PDO...

What would be a correct way for overwriting existing row? Specify a conflict resolution strategy, such as INSERT OR REPLACE INTO foo ... If the insert would result in a conflict, the conflicting row(s) are first deleted and then the new row is inserted....

Keep HashMap with object data while app is idle - Android

May be the activity is again loading that is onCreate() is called. So save the state and restore it. Use onSaveInstanceState() and onRestoreInstanceState(). Let me know whether it worked or not.

All the information you need is right here, before your eyes. No resource identifier found for attribute 'scalteType' in package 'android' There is no attribute called "scalteType" in ImageView. Find it in the layout file 'main.xml' and change to "scaleType"....

Is there any sdk to log exceptions, events and errors in production app?

Flurry analytics crashlytics They will give you the logs and errors in production app..I think this will suits you well...

List view not returning to original state after clearing search