Supporting iPhone 5 with iOS7 and iPhone6

I'm not getting my application to work on both iPhone6 with iOS8 and iPhone5 with iOS7. Maybe it is the case I remove support for iOS7 but I don't think it is a good reason.

I'm working on a legacy code and I was an Android developer so I don't fully understand iOS. But my is case is, I'm trying to support iPhone6 and to do that I added a new XIB on 'Launch Screen File' on project configs. Before that my code was working great on iPhone4, 5 and 6. But after that all the screens stopped to auto resize to fulfill the iPhone6 screen and on iPhone5 when running iOS7 the apps shows black bars on top and bottom of the screen. But with iOS 8 it runs OK. 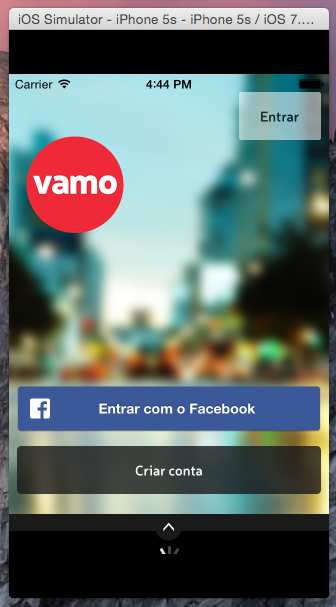 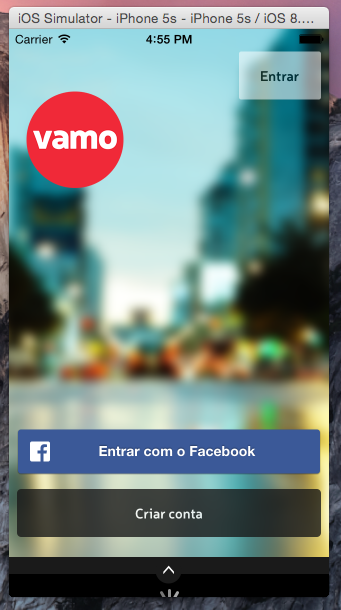 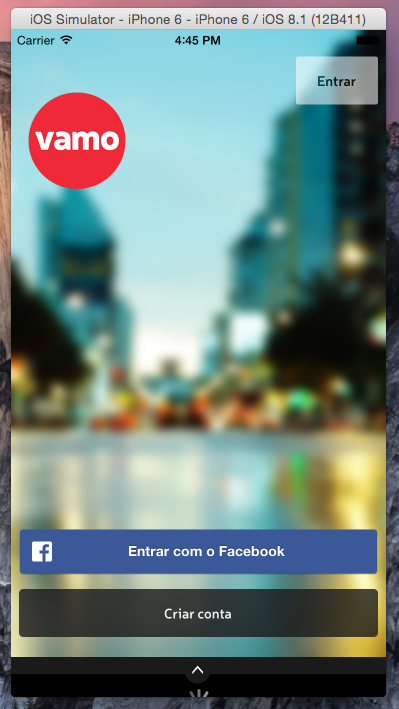 I fixed the resize problem for iPhone6 adding the correct constraints on xibs. But I`m not able to fix this iPhone5 problem.

And despite this error, another strange behaviour I'm facing is that I'm unable to send the application to Apple Store because it says it is not currently supporting iPhone5. The xCode error is: 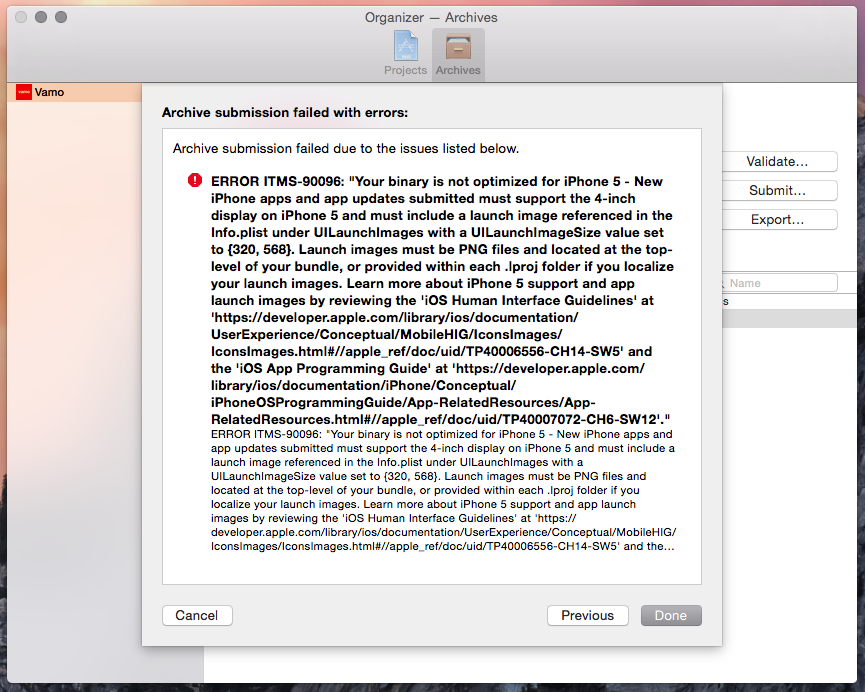 This error looks like outdated because the second link is not working.

The only similar erros I found, about how to support iPhone5, are from 2012 or 2013 before iPhone6, and they basically tells to add new launch image for the iPhone5 size, as my app was already running on iPhone5 so I think it is not the problem. 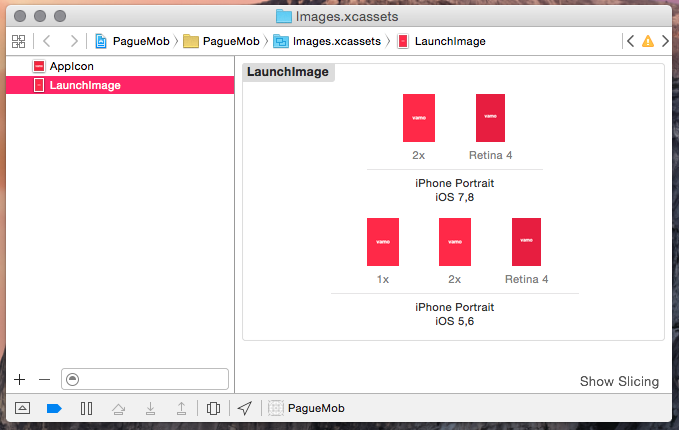 So, what am I doing wrong? Or what config should I change to fix that?

So, after some help from @Tommy to point the way I managed to fix my problem.

So to fix the problem I had to readd the [email protected] image to project's root folder and set 'Launch Images Source' to 'Don't use assets catalog'. That way, as I understand, the [email protected] tells xCode that the project is optimized to iPhone5 runnning iOS7, and all other devices or the iPhone5 running iOS8 uses the 'Launch Screen File'.

So instead I was thinking to have a value associated with each button in the first view, have it sent to the second view via a segue, and then sent again to the third view and tell it to use the proper segue to the proper third view Controller...

You are abusing the inputView for something that it's not. The input view should be used for views the user an input data with, the input accessory view something you may want to extend that with. But its supposed be something like a keyboard. Your text view is NOT part...

How do I set the UISearchController's searchBar to a view that isn't the tableHeaderView or navigationItem.titleview?

iOS 8 Swift 1.2 and Parse - Attempt to present UIAlertController on ViewController whose view is not in the window hierarchy

Wikitude does not work. Poi do not change the position on phone position change

On some iPhone compass does not work properly, to fix it is required to reset location settings with iPhone Settings > General > Reset > Reset Location & Privacy. After that the application started to work without any code change. The solution was found by Roman Wueest at http://www.wikitude.com/developer/developer-forum/-/message_boards/message/665750?p_p_auth=XO5dD4BU...

Getting error in Adjust library, Integrated with Pods

After running pod install, make sure that you are opening the .xcworkspace instead of the .xcproject in Xcode to be able to build and use Pods in your project.

Error after update to Swift 1.2

First, assuming that authenticationObject is an LAContext, you can't call its canEvaluatePolicy method without handling the error that it potentially throws. Making sure that errors get handled* is what throws methods are all about. Second, when ObjC APIs that return BOOL with an NSError out-parameter are imported into Swift, they...

Test-Flight App Beta Testing Answer 1 : yes, Apps may only use TestFlight to beta test apps intended for public distribution and must comply with the full App Review Guidelines. Apple Developer Answer 2 : yes, there wan't be any problem if you selected minimum target as IOS 8. If...

No, in Xcode 7 the error is: error: cannot subscript a value of type '[CLPlacemark]?' with an index of type 'Int' Note of the ?. You have to unwrap that optional. So you can replace: if placemarks!.count > 0 { let pm = placemarks[0] as CLPlacemark self.displayLocationInfo(pm) } with: if...

iOS : How to test app on real device without spend $99 buying an account[using Xcode7] [on hold]

Wait for XCode 7 (or try the Beta now) which will allow testing on real hardware without a full developer account: see whats new in XCode

When you pause the location updates, the system considers that you don't need the location for now. Resuming it will only give you the current location. This is a normal behavior.

A Plugin to view PDF document in iOS cordova based application

No there is not. if your app supports iOS8 it must run on all devices which support that OS. iPhone 4S included.

You certainly can implement your own web service to return those HTTP responses. For testing your app you can use services like httpbin.org For example: To get a 403 response, simply send a request to http://httpbin.org/status/403 ...

Splash screen not visible for iPad, only a black screen gets shown

Please delete your derived data and clean the your project. Also reset your simmulater if you running over it. Hope it will help. Also check you have selected Universal App in your target setting. EDIT You should probably be using an Asset Catalogue for your launch images, which might be...

Switch between views using a Tabbar

I've fix my problem. I've originally put the line of code bellow on the viewDidLoad() of my controller : tabBarController.selectedViewController = mySecondViewController After moving this line in a different methode, call by a simple button, that worked......

The exact code will depend on your personal setup (I can imagine you've made a subclass of PFObject or similar), but try to experiment with the following code. I've also made another function called filterFriendsAfterBirthdays that might be useful for somebody reading this post. // // ViewController.swift // ParseFun //...

Check UITextfield have only Alphabet not numeric value

It looks like you aren't giving the CLLocationManager enough time to update the location. I looked at the documentation, and in the statement locationManager.location.coordinate.latitude, location is the only one that's an optional. It's implicitly unwrapped, so that's why you don't need an ! after it. In the printCurrentCoordinates method, you...

Blur Effect on TableViewCell when scroll

Using the device simulator for iOS 8 with Xcode 7

How to i create new arrays using swift?

A label adds a little margin round the outside of the text, and you have not allowed for that. If, instead, you use a custom UIView exactly the size of the string rect, you will see that the text fits perfectly: Here's the code I used. In the view controller:...

It looks like you're trying to add constraints to labels for a built-in cell style. The reason why this doesn't won't work is because they're (public yet) internal labels, and Apple's code is optimized to remove its labels from their contentView when Apple believes the labels won't be needed. When...

As kursus wrote in a comment: you do not remove the button and the label as subviews from their parentView (the actual modal view). If it will be presented again two new instances will be created and positioned over the previous ones. I guess you only see the label because...

UISearchController: show results even when search bar is empty

As mentioned in Using Swift with Cocoa and Objective-C, all Objective-C methods that use NSError to return an error object will now throw when called from Swift 2.0, so you need to use: do { try method() } catch let error as NSError { reportError(error) } Removing the reference to...

Swipe up to show button in UITableView?

Put the button on your first row and the rest of the data after. Set an inset on the tableview so the first row is hidden until the user scrolls.

UITableview with more than One Custom Cells with Swift

Let me start with answering your questions first. Do I have to code an own class for every cell?=> Yes, I believe so. At least, I would do that way. Can I use one tableviewController?=> Yes, you can. However, you can also have a table view inside your View Controller....

Figured out the issue. Turned out that I never stopped the locationManager from updating the current user location so the didUpdateLocations delegate method was being called continuously and consuming resources. Once I sent the stopUpdatingLocation method to the location manager it fixed the problem