I have a Three.js scene rendered and I would like to export how it looks after the animations have rendered. For example, after the animation has gone ~100 frames, the user hits export and the scene should be exported to STL just as it is at that moment.

From what I've tried (using STLExporter.js, that is), it seems to export the model using the initial positions only.

If there's already a way to do this, or a straightforward work around, I would appreciate a nudge in that direction.

Update: After a bit more digging into the internals, I've figured out (at least superficially) why STLExporter did not work. STLExporter finds all objects and asks them for the vertices and faces of the Geometry object. My model has a bunch of bones that are skinned. During the animation step, the bones get updated, but these updates does not propagate to the original Geometry object. I know these transformed vertices are being calculated and exist somewhere (they get displayed on the canvas).

The question is where are these transformed vertices and faces stored and can I access them to export them as an STL?

The question is where are these transformed vertices and faces stored and can I access them to export them as an STL?

The answer to this, unfortunately, is nowhere. These are all computed on the GPU through calls to WebGL functions by passing in several large arrays.

To explain how to calculate this, let's first review how animation works, using this knight example for reference. The SkinnedMesh object contains, among other things, a skeleton (made of many Bones) and a bunch of vertices. They start out arranged in what's known as a bind pose. Each vertex is bound to 0-4 bones and if those bones move, the vertexes will move, creating animation. 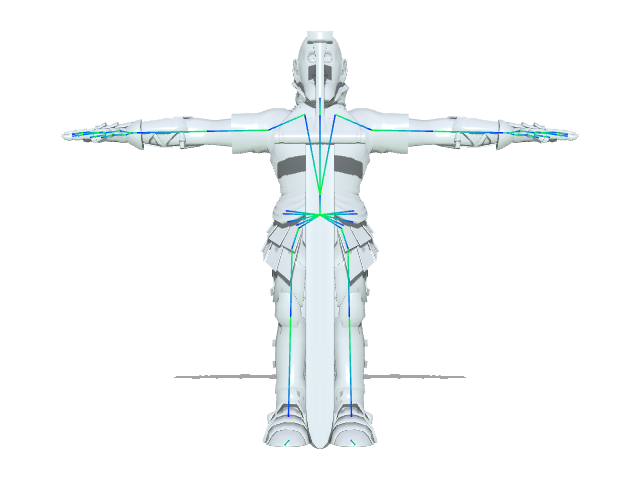 If you were to take our knight example, pause the animation mid-swing, and try the standard STL exporter, the STL file generated would be exactly this pose, not the animated one. Why? Because it simply looks at mesh.geometry.vertices, which are not changed from the original bind pose during animation. Only the bones experience change and the GPU does some math to move the vertices corresponding to each bone.

That math to move each vertex is pretty straight forward - transform the bind-pose vertex position into bone-space and then from bone-space to global-space before exporting.
Adapting the code from here, we add this to the original exporter: 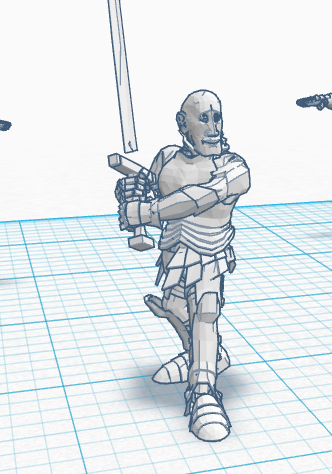 The full code is available at https://gist.github.com/kjlubick/fb6ba9c51df63ba0951f

The client doesn't get to cause arbitrary events to fire on the socket. It is always a message event. Using the same client, try this server code in your connection handler: socket.on('message', function(data) { // data === "pressed", since that's what the client sent console.log("Pressed!"); socket.close(); }); ...

Wordpress log out using URL and redirect to specify page

Please can someone help me understand the exec method for regular expressions?

Assuming the interval is between 1 and 15 seconds and changed after each interval. setIntervsal() does not fit. setTimeout() is here a good choice, because of the single interval of waiting. Every next interval gets a new time to wait and has to be called again. The random waiting time...

Your PHP is checking if $_POST['submit'] contains a value. Your form does not contain a form element with the attribute name="submit", so therefore it fails and moves straight to the else statement. If you want to check if the form was posted then you should instead check for: if (!empty($_POST))...

How to send current page number in Ajax request

DataTables already sends parameters start and length in the request that you can use to calculate page number, see Server-side processing. If you still need to have the URL structure with the page number, you can use the code below: "ajax": { "data": function(){ var info = $('#propertyTable').DataTable().page.info(); $('#propertyTable').DataTable().ajax.url( "${contextPath}/admin/getNextPageData/"+(info.page...

In your code you have 2 options to solve it first is jquery and second one is css. 1) Jquery On load trigger click event. $('#cont-1').click(); OR 2) CSS Add hide class in second tab <div class="tabcontent hide" id="cont-2-1"> and add activeLink class for login <a href="javascript:;" class="inactive activeLink" id="cont-1">Login</a>...

Even though you are using .on() with event delegation syntax, it is not working as the element to which the event is binded is created dynamically. You are registering the handler to col-md-1 which is the parent of the delete button, but that element also is created dynamically so when...

If you don't "override" the loadComponent method then the default component loader's loadComponent will be invoked which only calls the loadViewModel if you've provided a viewModel config option. In your getConfig method you are returning a config with require which means that your require.js module has to provide the necessary...

How to find the days b/w two long date values

The handler for each type of event is passed a certain set of arguments. The Catalog of Events has this to say about a "change" event: "change" (model, options) — when a model's attributes have changed. So if you say this: this.listenTo(members, 'change', this.fetch) then fetch will be called like...

Create array from another with specific indices

According to the Brackets Beautify Documentation, it uses JS-Beautify internally. The documentation for the latter mentions these parameters: -n, --end-with-newline -p, --preserve-newlines If you can force Adobe Brackets to pass parameters to the js-beautify call, I guess one of these should do the trick. UPDATE According to the Github repo,...

want to show and hide text using “this” jquery

How to get my node.js mocha test running?

If the height or width of the canvas is 0, the string "data:," is returned. This is most likely the cause for some images to fail to receive a proper dataUrl. Check your img elements and/or scripts to obtain and set the width and height of the canvas. The...

Replacing elements in an HTML file with JSON objects

Javascript is a client-side language. Session are server-side component. If you want to update session when user does something on your page, you should create a ajax request to the server. Or maybe use some client side variables that, for some aspects, are similar to session (they will be forever...

How to use a service with Http request in Angular JS

ofcservices.getnews() is a promise You need manage with the function sucess and error ofcservices.getnews(). success(function(data) { $scope.news=data }). error(function(data, status, headers, config) { //show a error }); As weel change app.factory('news' to app.factory('newsFactory' and call it in controller('news', function($scope, newsFactory) { You can get more data about promise in the...

Get all prices with $ from string into an array in Javascript

A jQuery only way would be to iterate over the nth-child(4n) $('.thumbnail:nth-child(4n)').each(function(){ $(this) .prevAll('.thumbnail').andSelf() .wrapAll($('<div/>',{class:"new"})) }); Demo Considering the complexity, not sure whether the prevAll() performs better than the plain for loop. Referring one of my similar answer here...

Javascript change the souce of all images present inside a string

You should use the Angular $http.jsonp() request rather than $http.get(). JSONP or “JSON with padding” is the communication technique which allows for data to be requested from a server under a different domain (also known as a Cross Origin Request). Which is what you have used in your jQuery AJAX...

Merge and sum values and put them in an array

Without custom logic, it's not possible to achieve what you want. However I believe you could find a compromise by using ES6 modules instead of CommonJS modules. You would be able to write export var test = 'test'; which declares and exports a variable test. You can then import it...

Substring of a file

Javascript function to validate contents of an array

Javascript: Forloop Difference between i++ and (i+1)

Ok, you'll want to check out Structuring your application. You'll have to make the file with the definition load earlier, or the one with the fixture later. Normally you have your collections inside lib/ and your fixtures inside server/fixtures.js. So if you put your insert code into server/fixtures.js it'll work....

The way I think you will have to do it is in each element individually and use this jquery small plugin I rewrite here is the code and also fiddle the html <div id="parent"> thisi sthe fpcd <p>p</p> </div> plugin to find the content of the selector text without child...