Memory analysis in Android: dominator_tree does not show all the instances of some objects

I'm using Eclipse Memory Analyzer, for testing the behavior of MainActivity in my Android app.

I've rotated my device exactly 10 times, so I have created 11 instances of MainActivity class.

Looking at the Histogram tab in Eclipse Memory Analyzer, I obtain this 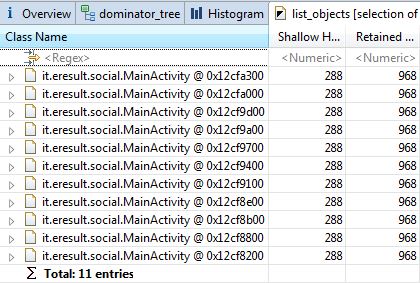 that sholud be right, since I have exactly 11 instances of the MainActivity class as expected (assuming that the GC has not yet released these Activities).

But If I search for "MainActivity" in the dominator_tree tab I obtain only 4 instance (I'm not sure that these are the instance... probably it just show the reference active in my application, not all object in the heap): 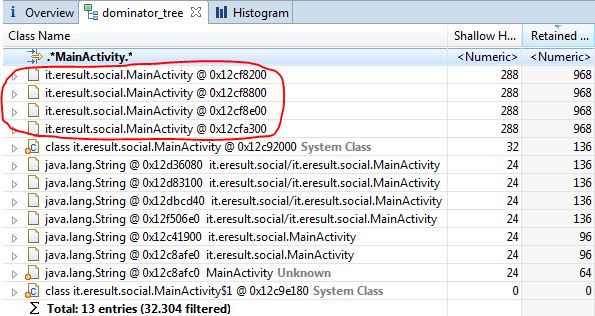 Where are the other 6 instances? Why these are not shown in the dominator_tree diagram?

Analyzing the results that are shown in the dominator_tree I have understand what happened:

The dominator three show only the objects that have at least one path from GC root to them. It requires at least one reference for being shown in that diagram (It doesn't metter if is a Weak reference, Soft reference, Strong reference, or Phantom reference).

So, the 6 objects that I can see only in the Histogram, are not shown in the dominator_tree diagram since they have no References to them (they are "floating" in the heap).

In particoular one object (obviously the current shown Activity) is shown in the dominator_tree diagram since in my application (for testing purpose) I have used a PhantomReference for traking the GC activity over my objects.

Here is shown one of the objects obtained from the dominator_tree diagram:

that show a GC root (pr) that is a static variable, that maintain a PhantomReference to my Activity. In fact the code inside my activity (in the onCreate() callback) is:

It is also interesting to notice that also without my PhantomReference, the penultimante created Activity is always shown in the dominator_tree diagram, since it has a Reference active that starts from the GC root (Native Stack). As you can see below:

It seems like Android uses a sort of cache for the previous instantiated Activity.

Summarizing: The dominator_tree diagram only shows the objects that have at least one path from the GC root to them. While Histogram shows all the objects in the heap memory.

How to resolve Out of Memory Error on Bitmap in Android?

Option A A base Activity class that implements the logic for the menu items - in this case all 30 of your Activities should extend the base Activity. This approach has the serious limitation that it forces you to extend a class even though you may need to extend another...

Why i get can not resolve method error in class android?

Is there any way to use a pre-existing database from Xamarin without copying it from Assets?

You don't want to use it from assets, even if you could, because assets is a compressed read only file, part of your installation. You can't write updates into it, which kills 90% of database use. And its inefficient for reading as its zipped up. So you really do need...

Dagger 2 Custom Scope for each Fragment

Is there any sdk to log exceptions, events and errors in production app?

Flurry analytics crashlytics They will give you the logs and errors in production app..I think this will suits you well...

how does android ImageView resize my image?

Set value for Spinner with custom Adapter in Android

Keep HashMap with object data while app is idle - Android

May be the activity is again loading that is onCreate() is called. So save the state and restore it. Use onSaveInstanceState() and onRestoreInstanceState(). Let me know whether it worked or not.

why is Android app publishing taking several days [on hold]

here is detail provided by the google and for more details http://www.appmakr.com/blog/how-long-app-approved/ https://somethingididnotknow.wordpress.com/2014/03/11/how-long-does-it-take-for-the-google-play-store-to-publish-my-app-in-beta/ Android application approval process in playstore ...

Before the official support library came out I ported the FAB over. There is now a Xamarin.Forms sample in my GitHub repo that you can use: https://github.com/jamesmontemagno/FloatingActionButton-for-Xamarin.Android...