Why translating matrix on Z axis is not the same as changing position on the Z axis by same number?

I have a mesh that has origin point at the bottom. I want to move it by -132 on Z axis. If I change the position of the Mesh it is on the correct position. But If I translate it on the Z axis by -132, the mesh is off by 20. Why am I not getting the same result?

The way I am translating the matrix:

Here is the image of the mesh: 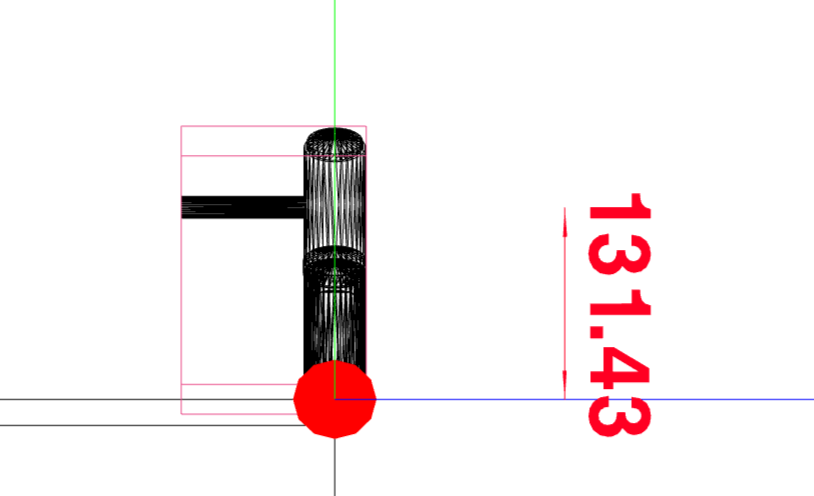 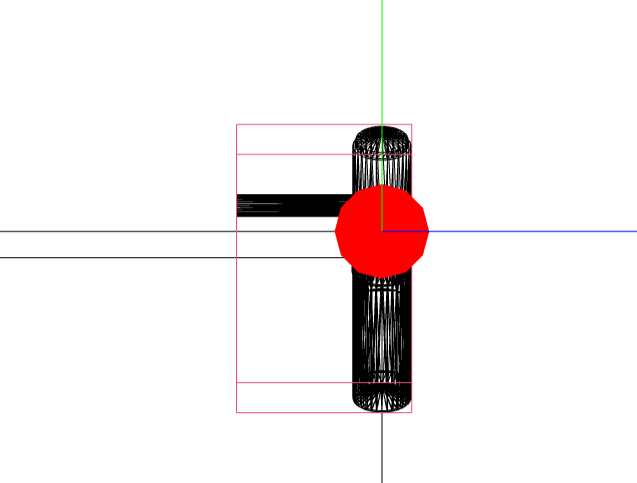 So the Z coordinate is at 500; But I have to move it down by -132. If it move it by moving the position down 132 it is on correct position. But I want to translate the matrix to get the origin point down by 132. Here is also the matrix:

update after further clarifications and chat

Furthermore there is the issue with relative coordinates and nesting 3D objects inside other 3D objects. The final (world) transform of an object is affected whether it is inside other object or not.

Finally, the actual mesh position (local transform) versus vertices position plays a role in the way the mesh (and the geometry) will be (eventualy) projected onto 2D, so the projection angle changes (see above).

As clarified, the question is about shifting a mesh in such a way as to shift the origin, so further transformations (e.g rotations) can be done with respect to this shifted origin. A standard way to achieve this behaviour, in 3D programing, is to include pivots or wrappers around the mesh and position the mesh relatively inside with respect to the wrapper. Then apply any further transformations (e.g rotations) on the wrapper itself. This gives the effect that the mesh is rotating with respect to another axis (instead of the center).

The way this happens is that the wrapper indeed rotates around its own origin (i.e at 0,0,0) but the mesh inside is shifted so it appears as rotating with respect to another axis. A common example of this is modelling a 3D car wheel, which can rotate around its own axis (i.e spinning) but also it translates with the rest of the car. So one adds a wrapper around the wheel, where the wrapper is indeed translated with the rest of the car, but the wheel is rotated inside the wrapper as if no translation is present (kind of reverse situation of what you need here, but same difference).

You may optionaly want to check the MOD3 pivot modifier which creates custom pivots as origin points/axes (ps i'm author of the port). A wheel modifier is also included in MOD3 which solves what is described above as the wheel problem in 3D.

To use a wrapper 3D Object in your code do something like this:

Cordic is an extremely fast and efficient algorithm for implementing trigonometric functions. The most common implementations you can find refer to sin/cos functions but it can be used for their hyperbolic counterparts. Once you have an implementation for sinh/cosh is easy to get tanh. Have a look here...

You never reset the counter in the loop, so you only calculated the one and two values once. The other 499999 runs you re-use the same one and two counts, because the while (counter < 500) condition remains False. You can easily see the effect in the one and two...

Matlab: For loop with window array

In the meanSum line, you should write A(k:k+2^n-1) You want to access the elements ranging from k to k+2^n-1. Therefore you have to provide the range to the selection operation. A few suggestions: Use a search engine or a knowlegde base to gather information on the error message you received....

Sum of n-1 columns of a double matrix in MATLAB

numpy.matrix and .shape - which number is rows, and which is column?

rows, columns are just the names we give, by convention, to the 2 dimensions of a matrix (or more generally a 2d numpy array). np.matrix is, by definition, 2d, so this convention is useful. But np.array may have 0, 1, 2 or more dimensions. For that these 2 names are...

Create a Triangular Matrix from a Vector performing sequential operations

Mentioned solution with fseek is good. However, it can be very slow for large matrices (as disks don't like random access, especially very far away). To speed up things, you should use blocking. I'll show a basic concept, and can explain it further if you need. First, you split your...

This should work whether or not polygon origin is aligned to center of gravity. I'll start with the most important stuff, and end with supporting methods that have changed. Edit: Revised implementation. struct Response { Response() : overlap(std::numeric_limits<double>::max()) {} Vector2D axis; double overlap; }; bool FindAxisLeastPenetration(const Polygon& a, const Polygon&...

complexity of generating a sparse matrix

Matlab - Multiply specific entries by a scalar in multidimensional matrix

Modify a matrix in ocaml

In an expression the = operator in OCaml is a comparison operator that tests for equality. To assign to an array, use the <- operator. The compiler is complaining because your expression has type bool (i.e., the result of the comparison). The expression in a for should have type unit...

How to solve for matrix in Matlab?

You are considering if n is negative in the n % 2 != 0 case, but not in the else case. To make it clearer, I would handle it in a different recursive case. Take the negative n handling out of the if block, and add this line after the...

You cannot push back a matrix into a vector. What you can do is preallocate memory for your vector (for speeding things up) then use the std::vector<>::assign member function to "copy" from the matrix into the vector: vector<int> collectionSum(gray.rows * gray.cols); // reserve memory, faster collectionSum.assign(*auxMat, *auxMat + gray.rows *...

LinkedHashSet and subList, getting n of collection

This is combinatorics. See more information about the structure you need to understand, i.e. a permutation without repetition, also called a combination. You might be interested in combinatoricslib, a Java library on Google Code, which you could use for your program. You could also try to solve it without a...

Interpolation inside a matrix. Matlab

Join matrices with same values in different vectors in MATLAB

Numpy and dot products of multiple vector pairs: how can it be done?

What is an efficient way of multiplying massive polynomials in Java?

Unable to convert between 1d and 2d array values

How to calculate the number of all possible combinations for a range of numbers from 1 to N?

MATLAB removing rows which has duplicates in sequence

To clarify @Dan Getz and add @collapsar answer I will add the following: Dan's Formula is correct: (score1 * weight1 + ... + scoreN * weightN) / (weight1 + ... + weightN) The beauty of the weighted average is you get to choose the weights! So we choose days since...

function similar to head() for matrix

I can't fix camera to any object in a 2D Matrix

The reason you are getting NullReferenceException is because GraphicsDevice is not initialized yet. Instead of creating your Camera in the TheGame constructor, create it in the Initialize method: protected override void Initialize() { base.Initialize(); camera = new Camera(GraphicsDevice); } How to make camera fixed on any object in the Matrix...

find indices x,y of a matrix of specific values in python

You need to change your where line to something like: data_indices = numpy.where((data<=obj_value_max) & (data>=obj_value_min)) Notice the ()s around each conditional clause and the use of & (meaning "and"). This works because in numpy, <,<=,>,>=,&,|,... are overridden, i.e. they act differently than in native python. and and or cannot be...

If mmList is there, then it's not going away (however poorly documented it may be -- feel free to suggest documentation improvements ...). How about do.call(cbind,getME(m2,"mmList")) (which would seem to generalize correctly for multi-term models)? I agree that it's a bit of a pain that Zt doesn't distinguish correctly between...

Factorial of a matrix elementwise with Numpy

There's a factorial function in scipy.misc which allows element-wise computations on arrays: >>> from scipy.misc import factorial >>> factorial(mat) array([[ 1., 2., 6.], [ 2., 6., 24.]]) The function returns an array of float values and so can compute "larger" factorials up to the accuracy floating point numbers allow: >>>...

Have I properly sorted these runtimes in order of growth?

How to set first column to a constant value of an empty np.zeros numPy matrix?

Creating a matrix based on a function in R

Basically, you are finding all permutations of the array using a recursive permutation algorithm. There are 4 things you need to change: First, start your loop from pos, not 0 Second, swap elements back after recursing (backtracking) Third, only test once you have generated each complete permutation (when pos =...

How do I apply multiple matrices in spriteBatch.Draw()?

Simply multiply the matrices before passing to spriteBatch.Begin. Matrix multiplication allows the effects of both matrices appended into a single matrix. Note that this operation is not commutative, meaning that A * B != B * A. In your case, you should probably multiply scaling matrix with the camera matrix....

Matlab: Writing to a file

If you want to get the matrices to be displayed in each column, that's going to be ugly. If I'm interpreting your request correctly, you are concatenating row vectors so that they appear as a single row. That's gonna look pretty bad. What I would suggest you do is split...

How to print the right hemisphere of a square matrix

For every (i, j) pair (there are n^2 in total), you reach the inner part of the loop where you find the similarity and then conditionally add elements to your sparse matrix. Finding the similarity takes "d" operations (because you need to loop through each of your dimensions) and conditionally...