I have a SKView with a picture of a keyboard in a window as shown below. I would like the background color of the SKScene it's presenting to be the same color as the window behind it, so that it would appear as if the keyboard was just in the window, and not in something else that was in the window. After consulting the NSColor documentation, I tried setting the background color of the SKScene as NSColor.windowBackgroundColor(). The color below is what I got. I'm assuming there was some kind of error and so it defaulted to black. That being said, how do I access the default color of a window? 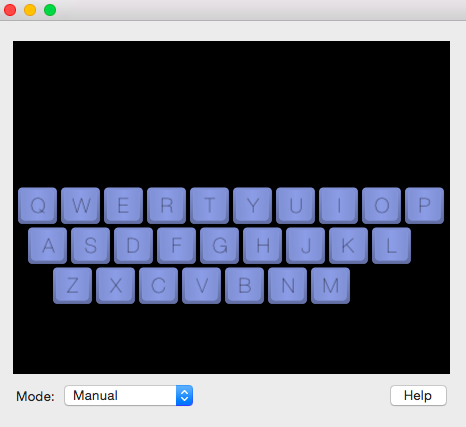 I think that using windowBackgroundColor() gives black if the view doesn't allow transparency and works if it does because it's effectively being translated to clearColor() by "accident". windowBackgroundColor() is a bit strange. It's not in either an RGB nor a gray-scale color space and it can't be converted to either of those. I'm guessing that SKScene tries to convert the background color to the RGB color space and, when that fails, it uses clearColor() as a fallback.

How to set screensaver thumbnail in Settings panel on Mac?

By examining the default screensavers, I figured out that you need to add two files: thumbnail.png, 58x90px [email protected], 116x180px When compiled by Xcode, this is automatically included in the .saver Resources folder as "thumbnail.tiff" with two subfiles....

Binding an NSTableView to an array of strings in Swift

The Class Name should absolutely be set to a valid class. The bigger problem is that the array controller doesn't really play nicely with arrays of strings. There's no (reasonable) way to use -setValue:forKey: on a string since the string is itself what's being edited (replaced), not some property (like...

Window is closing immediately after I run program in PyQt 4 (anaconda) [PyCharm 4.5]

You need to block the execution of the program after you call window.show() so that the window object remains active otherwise it will be garbage collected. app.exec_() does this for you. {__author__ = 'Jay' import sys from PyQt4 import QtGui app = QtGui.QApplication(sys.argv) window = QtGui.QWidget() window.show() app.exec_()} # added...

What is the best way to make sure I am not using any unavailable API's on OSX?

For the moment, there's no easy way to do this, since as you said, 10.9 is the farthest back you can specify. Until Xcode 7 is released, which I believe will only help with more recent SDKs anyway, you have few choices, none at all convenient: Keep a cheap Mac...

You have complete control with a subclass of NSFormatter. I'm not sure why you think you don't. Override isPartialStringValid(_:proposedSelectedRange:originalString:originalSelectedRange:errorDescription:) and implement the desired logic. From the docs (with some minor edits by me): In a subclass implementation, evaluate [the string pointed to by *partialStringPtr] according to the context. Return YES...

How to get storage capacity of mac programatically?

blocks and the stack

You are completely misunderstanding what "on the stack" means. There is no such thing as a "stack of variables". The "stack" refers to the "call stack", i.e. the stack of call frames. Each call frame stores the current state of the local variables of that function call. All the code...

How to get NSTableView to use a custom cell view mixed with preset cell views?

How to create few apps in one bundle?

Initializing a xib view as a subview of another NSView

You could use the loadNibNamed:owner:topLevelObjects: method. Here's an example: NSArray *views = nil; [[NSBundle mainBundle] loadNibNamed:@"TestView1" owner:nil topLevelObjects:&views]; [self.view addSubview:[views lastObject]]; The above code will load the top-level contents of the XIB into an array. Per the documentation: Load a nib from this bundle with the specified file name and...

Please help protocol code that does not make sense

How to detect when a specific window is closed in java

Because both frameA and frameB are using the same instance of WindowListener (this), when either frame is closed, your WindowListener is notified (of both/either). You could use WindowEvent#getSource to get the source of the event, but a easier solution might be to give each frame their own instance of a...

What's special about an ampersand in an NSUndoManager action name?

Back in the NeXT days, menu items could have a "mnemonic", which was a character that appeared underlined in the menu. If the user typed that character while the menu had focus, that item would be selected. In code, the mnemonic was indicated in a menu title string by prefixing...

Before I answered I wanted to check if the same happened to me-- but when I created a custom NSViewController in a new iOS OR OS X app, both would generate the @interface in the implementation file (.m file) So I'm not sure why you are seeing that. However, to...

There are a few items of concern with your code considering the goals you mentioned and in general. There are a few things for you to reconsider regarding your overall approach. One issue I see (that has nothing to do with your actual problem) is -[NSNumber integerValue] returns an NSInteger,...

How do I scale the graphics of a game?

By default, SpriteBatch assumes that your world space is the same as client space, which is the size of the window. You can read about SpriteBatch and different spaces in a post by Andrew Russell. When you are resizing the backbuffer, the window size will also change changing the world...

Interesting question, I've never applied auto-layout to a text field so I was curious myself. My solution was to listen for the NSWindowDelegate method, -windowDidResize. Upon that, I would check to see if the text field was the first responder. If it was, I set it to be first responder...

After checking several options, I have decided to use xctool because this is a recommended tool when the tests have been done using KIF. At the beginning I had some trouble trying to run the test, but after reading other posts I have use the following commands: For running all...

Indeed, NSView has a func print(_ sender: AnyObject?) method to open the Print panel, which is an unfortunate conincidence. Your myPrint() wrapper has some limitations, for example myPrint("b", appendNewline : false) does not compile. A better implementation would be func myPrint<T>(o : T, appendNewline nl: Bool = true) { print(o,...

The problem is with the way NSLog() and the NSDate description method display the date which is in GMT (UTC). Notice the time offset: "+0000" which is probably not your timezone. All dates are stored internally in GMT. To obtain a string in the current or another time zone use...

Why does the window background remain black in fullscreen?

What is a “non-weak zeroing reference”

Have you profiled your App? Before ripping your view hierarchy apart, use instruments with the time profiler to find out where the time is actually being spent. CALayers are more efficient than UIViews, and it is recommended to avoid using drawRect if you don't need to, but before resorting to...

How to set the default writing direction for NSTextView?

creating a pop-up(or is it a pop-over?) window for a webpage

You could use a solution like fancybox, I believe this is what are you looking for http://fancybox.net

Somewhat predictably this was fixed by swapping the order of the last two lines: [self.previousWindow orderOut:self]; [newWindow makeKeyAndOrderFront:self]; I initially had concerns that doing things in this order in an application where applicationShouldTerminateAfterLastWindowClosed returns YES might cause the application to close prematurely but this does not seem to be the...

How to get custom table cell views into NSTableView?

You need to drop the new cell view in the table column that would contain that kind of cell view (the one whose identifier is "valueColumn", in this case).

It seems to me that the padding added to the topbar is what is appending the extra pixels so just take out the padding or change it up to your fit .topbar { background-color: #1f1f1f; border-top: solid 3px #0b0b0b; width: 100%; min-height: 56px; position: relative; z-index: 2; } JSFiddle...

Opening a new window is as simple as creating a new frame like you've already done in your display() function. For instance, this: JFrame newFrame = new JFrame("New Window"); newFrame.setDefaultCloseOperation(JFrame.EXIT_ON_CLOSE); newFrame.setVisible(true); Should be enough to open a new window with nothing in it (you'll probably want to add something to...

How do you work with views in MainMenu.xib?

So the default is that your main application window is an outlet in the app delegate. You should keep MainMenu.xib's owner as the app delegate. A common alternative, if you are creating your own custom window controller, is to create a property in the AppDelegate of type CustomWindowController, then in...

Too many arguments to function call, expected 0 method_invoke

You're using method_invoke wrong. One must never actually call method_invoke directly. It doesn't know what arguments to expect. That is why its declaration, in the documentation, is written in a completely open-ended form: id method_invoke ( id receiver, Method m, ... ); One must first cast the method_invoke function to...

Actually nevermind I was being stupid, this actually works, the mistake I made is I changed the segue from UIVC_2 to SWRevelVC, but I kept testing using another VC (let's call it UIVC_3) and UIVC_3's segue hasn't been linked to SWRevealVC but instead the navigation controller...

If you need to match [ and ] you can use matches operator, which uses regular expressions. Example: NSArray *array = @[@"[apple]", @"[boy]", @"[dog]", @"cat"]; NSPredicate *pred = [NSPredicate predicateWithFormat:@"self matches %@", @"\\[dog\\]"]; NSLog(@"%@", [array filteredArrayUsingPredicate:pred]); About your update: predicateWithFormat is not like stringWithFormat, as it does some additional jobs...

As discovered in comments, in order to be working in chrome, you need to copy your text as html (public.html pasteboard type) or probably both html an rtf types.

updateTrackingAreas: override only works for the first 2 times?

Ok, I just reinstall OS X Yosemite and compiled it again with Xcode 7 beta 1. The problem no longer exists. Might just be a bug of El Capitan. Already reported it to Apple. Thank you all....

Typically the interface for a class (ViewController in your case) is in the header file (.h). However some developers use the convention of putting a class extension at the top of implementation files as a way of "faking" private methods (which Objective C doesn't have.) So you could see this...

Why @selector can call a method which is declared in an implementation file?

Private methods are just that: private. They still exist, they're just kept secret from the outside world. There's nothing built in to Objective-C to check where a method is being called from and complain at runtime; that compile-time warning about an undeclared selector is exactly the failure of Class B...

NSTableView - how to get automatic and manual sorting working together?

I will be damned but the reason for the error is obviously that the property is read-only. So adding a setter, or better yet, change the code to simply: var customSortDescriptors = [NSSortDescriptor(key: "string", ascending: true, selector: "localizedStandardCompare:")]; fixed the error and both, automatic and manual sorting works....