Blending between an N-sided shape and a perfect circle with the same origin?

I'm currently writing a 3D shader for a computer program, and I've run into a bit of a problem I'm hoping someone can help me with.

The shader is designed to generate an N-sided shape in 2D space. The 3D program that drives the shader essentially passes you a set of x, y coordinates (centred around 0, 0) and expects you to output the appropriate colour. I've already written the portion of the shader that generates these shapes, which works well enough. What I'm having problems with is adding "curvature" to the sides of these shapes, essentially blending between a perfect circle and an N-sided polygon.

The way the shader currently works is as follows:

1) I figure out the angle of a single segment of the N-sided shape:

1) I break down the problem into a single right angle triangle, which uses the following equations:

2) I calculate the distance from the origin of the N-sided shape to the edge, traversing through the coordinates the shader has been given:

where radius is typically 0.5. Then, if pDist1 is > pDist2, the shader returns one colour, otherwise it returns another. This allows me to successfully draw N-sided shapes with any number of sides.

Here's where things get tricky... I also need an option that "blends" between the N-sided shape and a perfect circle (which has the same radius as the N-sided shape). Originally I thought I could do this by simply modifying pDist2 as follows:

where curvature is a value between 0 and 1 (representing 0% to 100%). This doesn't work at all, instead I get a weird wavy edge which I believe has something to do with my angles and the difference between pDist2 and the radius of a circle. In theory, it should work assuming pAngle is pointing at the exact centre of one side of the polygon, but as it approaches a corner things seem to get more and more distorted.

How can I fix this? It seems like there should be some reasonably simple formula for correcting pDist2 based on the difference between pAngle and (segmentAngle / 2), but I can't seem to figure out what that should be. 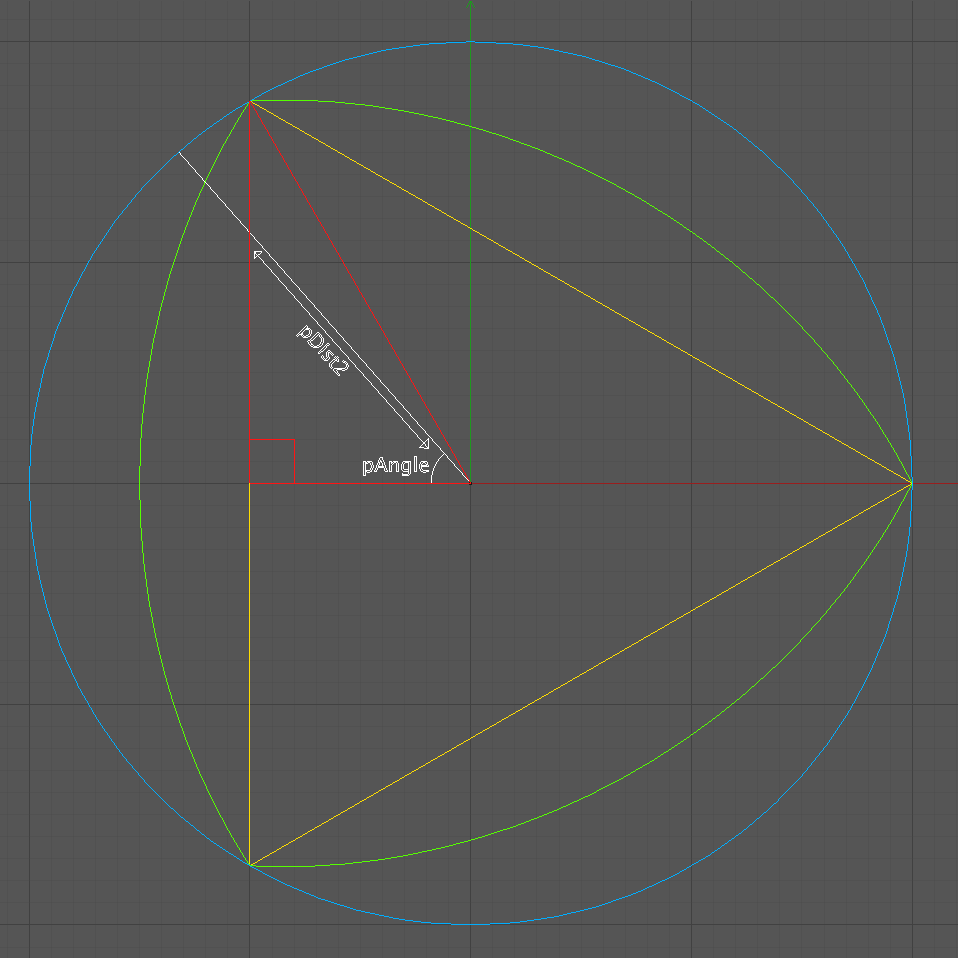 Here's a solution, but you'll have to change the test to something other than pDist1 > pDist2:

This code expands each edge of an N-sided polygon into a circle in the direction of the normal to the edge. The edge angle of the closest edge is calculated and used to compute the distance to the center of the edge from the origin (the radius is taken to be measured to the corners of the polygon) and a normal vector.

Then the dot product of the x,y point and the edge normal is taken to see if it is outside the polygon. If it is, then it calculates how far outside it is and then adjusts that amount based on the curvature, in the direction of the edge normal. Then it does a point to radius test with the adjusted point.

Another approach is to use your initial equations but change the calculation of pDist2 like this:

Hopefully this should allow the gradient coloring you are after.

If you specifically want a linear blend between the polygon and the circle in the direction of the edge normals, a more accurate calculation is

sys.argv in a windows environment

You are calling the script wrong Bring up a cmd (command line prompt) and type: cd C:/Users/user/PycharmProjects/helloWorld/ module_using_sys.py we are arguments And you will get the correct output....

Django: html without CSS and the right text

Are you using the {% load staticfiles %} in your templates?

how to enable a entry by clicking a button in Tkinter?

How do I read this list and parse it?

Sort when values are None or empty strings python

If you want the None and '' values to appear last, you can have your key function return a tuple, so the list is sorted by the natural order of that tuple. The tuple has the form (is_none, is_empty, value); this way, the tuple for a None value will be...

Check the code before the print line for errors. This can be caused by an error in a previous line; for example: def x(): y = [ print "hello" x() This produces the following error: File "E:\Python\test.py", line 14 print "hello" ^ SyntaxError: invalid syntax When clearly the error is...

Identify that a string could be a datetime object

Make sure you have set properly with ~/.boto and connect to aws, have the boto module ready in python. If not, go through this first: Getting Started with Boto For example, you need assign a new EIP 54.12.23.34 to the instance i-12345678 Make sure, EIP has been allocated(existed) and you...

As stated in my comment, this is an issue with kernel density support. The Gaussian kernel has infinite support. Even fit on data with a specific range the range of the Gaussian kernel will be from negative to positive infinity. That being said the large majority of the density will...

MySQL is actually throwing a warning rather that an error. You can suppress mysql warnings like this : import MySQLdb as mdb from warnings import filterwarnings filterwarnings('ignore', category = mdb.Warning) Now the mysql warnings will be gone. But mysql errors will be shown as usual Read more about warnings at...

You have made silly mistake in defining _columns. _colums is not valid dictionary name for fields structure. Replace this by _columns and restart service and update module. ...

After updating your .bashrc, perform source ~/.bashrc to apply the changes. Also, merge the two BONSAI-related calls into one: export BONSAI=/home/me/Utils/bonsai_v3.2 UPDATE: It was actually an attempt to update the environment for some Eclipse-based IDE. This is a different usecase altogether. It should be described in the Eclipse help. Also,...

Sum of two variables in RobotFramework

By default variables are string in Robot. So your first two statements are assigning strings like "xx,yy" to your vars. Then "evaluate" just execute your statement as Python would do. So, adding your two strings with commas will produce a list: $ python >>> 1,2+3,4 (1, 5, 4) So you...

How to use template within Django template?

You can use the include tag in order to supply the included template with a consistent variable name: For example: parent.html <div class="row"> <div class="col-md-12 col-lg-12 block block-color-1"> {% include 'templates/child.html' with list_item=mylist.0 t=50 only %} </div> </div> child.html {{ list_item.text|truncatewords:t }} UPDATE: As spectras recommended, you can use the...

How to put an image on another image in python, using ImageTk?

Just use photoshop or G.I.M.P.. I assure you, doing it that way will be much simpler and less redundant than essentially getting Tkinter to photo edit for you (not to mention what you're talking about is just bad practice when it comes to coding) Anyways, I guess if you really...

about the deadlock: It is safe to use stdout=PIPE and wait() together iff you read from the pipe. .communicate() does the reading and calls wait() for you about the memory: if the output can be unlimited then you should not use .communicate() that accumulates all output in memory. what...

How does the class_weight parameter in scikit-learn work?

First off, it might not be good to just go by recall alone. You can simply achieve a recall of 100% by classifying everything as the positive class. I usually suggest using AUC for selecting parameters, and then finding a threshold for the operating point (say a given precision level)...

How do variables inside python modules work?

The convention is to declare constants in modules as variables written in upper-case (Python style guide: https://www.python.org/dev/peps/pep-0008/#global-variable-names). But there's no way to prevent someone else to re-declare such a variable -- thus ignoring conventions -- when importing a module. There are two ways of working around this when importing modules...

I'm afraid you can't do it like this. I suggest you have just one relationship users and validate the insert queries.

Short answer: your correct doesn't work. Long answer: The binary floating-point formats in ubiquitous use in modern computers and programming languages cannot represent most numbers like 0.1, just like no terminating decimal representation can represent 1/3. Instead, when you write 0.1 in your source code, Python automatically translates this to...

Afraid I don't know much about python, but I can probably help you with the algorithm. The encoding process repeats the following: multiply the current total by 17 add a value (a = 1, b = 2, ..., z = 26) for the next letter to the total So at...

represent an index inside a list as x,y in python

According to documentation of numpy.reshape , it returns a new array object with the new shape specified by the parameters (given that, with the new shape, the amount of elements in the array remain unchanged) , without changing the shape of the original object, so when you are calling the...

if you only need to do this for a handful of points, you could do something like this. If intensites and radius are numpy arrays of your data: bin_width = 0.1 # Depending on how narrow you want your bins def get_avg(rad): average_intensity = intensities[(radius>=rad-bin_width/2.) & (radius<rad+bin_width/2.)].mean() return average_intensities #...

trying to understand LSH through the sample python code

a. It's a left shift: https://docs.python.org/2/reference/expressions.html#shifting-operations It shifts the bits one to the left. b. Note that ^ is not the "to the power of" but "bitwise XOR" in Python. c. As the comment states: it defines "number of bits per signature" as 2**10 → 1024 d. The lines calculate...

In sklearn, does a fitted pipeline reapply every transform?

The pipeline calls transform on the preprocessing and feature selection steps if you call pl.predict. That means that the features selected in training will be selected from the test data (the only thing that makes sense here). It is unclear what you mean by "apply" here. Nothing new will be...

How to check for multiple attributes in a list

You can create a set holding the different IDs and then compare the size of that set to the total number of quests. The difference tells you how many IDs are duplicated. Same for names. Something like this (untested): def test_quests(quests): num_total = len(quests) different_ids = len(set((q.ID for q in...

Can't get value from xpath python

The values in the table are generated with the help of javascript being executed in the browser. One option to approach it is to automate a browser via selenium, e.g. a headless PhantomJS: >>> from selenium import webdriver >>> >>> driver = webdriver.PhantomJS() >>> driver.get("http://www.tabele-kalorii.pl/kalorie,Actimel-cytryna-miod-Danone.html") >>> >>> table = driver.find_element_by_xpath(u"//table[tbody/tr/td/h3...

The event loop is already running

I think the problem is with your start.py file. You have a function refreshgui which re imports start.py import will run every part of the code in the file. It is customary to wrap the main functionality in an ''if __name__ == '__main__': to prevent code from being run on...

Peewee: reducing where conditionals break after a certain length

Try ...where(SomeTable.BIN.in_(big_list)) PeeWee has restrictions as to what can be used in their where clause in order to work with the library. http://docs.peewee-orm.com/en/latest/peewee/querying.html#query-operators...

Matplotlib: Plot the result of an SQL query

You might want to have a look at Tornado. It is well-documented and features built-in support for WebSockets. If you want to steer clear of the Tornado-framework, there are several Python implementations of Socket.io. Good luck!...

How to remove structure with python from this case?

Count function counting only last line of my list

I don't know what you are exactly trying to achieve but if you are trying to count R and K in the string there are more elegant ways to achieve it. But for your reference I had modified your code. N = int(raw_input()) s = [] for i in range(N):...